1.     Eutelsat in position to combine with OneWeb

On November 14th, 2022, Eutelsat and the main OneWeb shareholders signed the Final Agreement related to the combination of the two companies. The deal is the result of an increasing involvement of Eutelsat in OneWeb in the past few years. In March 2021, Eutelsat announced a $550 million equity investment in OneWeb, while the company increased its share in OneWeb in October 2021, becoming its second-largest shareholder, with a 22.9% stake. On March 22nd, 2022, Eutelsat announced a global multi-year Distribution Partnership Agreement (DPA) with OneWeb, which paved the way for the commercialisation of OneWeb services across key connectivity verticals including maritime, enterprise communications, aviation, consumer broadband, and Government business segments. On July 26th, 2022, Eutelsat and OneWeb signed an MoU to combine in an all-share transaction OneWeb’s LEO satellite constellation with Eutelsat’s orbital fleet in GEO.

The British government owns approximately 18% of OneWeb after investing $500 million in 2020 to rescue the company from bankruptcy, alongside OneWeb’s largest shareholder, Indian Bharti Global, which also invested around $500 million and owns 30% of the company. On the other hand, Eutelsat’s largest shareholder is France’s state-owned investment bank Bpifrance, with a 20% stake. Other Eutelsat´s shareholders include FSP, Lazard Asset Management Pacific Co. and CMA-CGM. 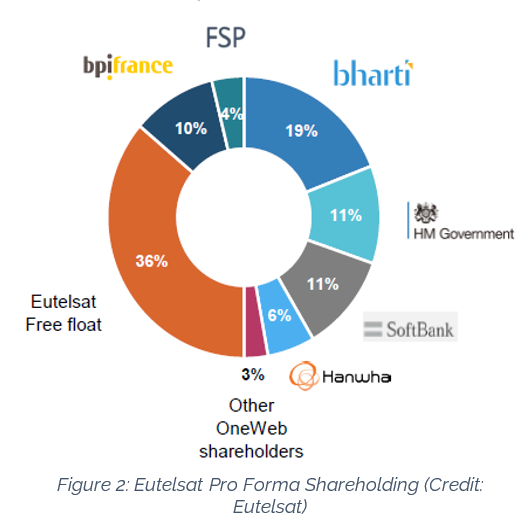 The transaction is expected to be completed indicatively in the next six-to-nine months pending antitrust and regulatory authorizations,
in particular the approval by the competition watchdogs and an extraordinary general meeting of companies’ shareholders. In January 2022, the new UK National Security Review came into force in the framework of the UK National Security and Investment Act 2021 (NSI Act). As part of the recently introduced procedure, the British government was requested by the House of Commons Defence Committee to conduct strict scrutiny of the combination to ensure it poses no risk to the UK’s national security.

The combined entity would be a multiorbital satellite operator to provide integrated GEO and LEO solutions and services, with the goal of capturing the fast-growing Satellite Connectivity market. The deal highlights the ambition of the two companies to leverage the complementarity of Eutelsat’s 36 GEO satellites with OneWeb’s 648 LEO assets in tackling the booming demand for connectivity across verticals such as aerial and maritime mobility, fixed data and government services, also building on the development of 5G and cloud technologies. Eutelsat has expended more than $500 million in the Konnect VHTS GEO satellite, focusing on the B2C market, with the aim of improving broadband coverage in Europe. The company has recently launched EUTELSAT 10B satellite, and contracted Thales Alenia Space to build a next-generation Flexsat to increment capacity over the Americas.

However, the company recognised LEO capability’s potential for B2B and B2G markets, including mobility, with low-latency requirements and that a full combination of LEO and GEO assets would address Eutelsat’s need for growth to offset the limited perspective on the GEO satellite broadcast business. On the other hand, it is in OneWeb’s interest to secure $2 to $3 billion to expand its constellation with Gen-2 constellation, leveraging Eutelsat´s interest in LEO-based connectivity solutions and readiness to invest in this domain.

The stock market reaction to the announcement of a potential all-share combination saw Eutelsat shares fall to their lowest in two years, dropping 15% after plunging more than 17% the day before. Eutelsat CEO, Eva Berneke, suggested that the stock’s fall was a result of an unexpected announcement “which created a lot of uncertainty on the market“. Arguably, Eutelsat’s declaration that the company will suspend dividends for the coming 3 fiscal years with cash flow focused on Gen-2 constellation (while maintaining a strong balance sheet) also played a major role in shareholder’s reaction. Eutelsat’s stock price has now almost fully recovered, showing an increasing understanding of the potential of the combination.

2.     A new signal of the transformation of the satcom ecosystem

The merger is a clear sign of an entire satcom ecosystem under transformation as a result of various forces at stake, including adaptation to ongoing market shifts, technological advancement and change in industry approach.

2.1 Market shift: satcom operators provide various solutions across various verticals, with direct-to-home (DTH) television traditionally representing the largest portion of the downstream segment of the space economy ($89.9 billion, the Space Foundation). However, GEO satellite operators have experienced a slowdown in returns over the past five years and are trying to move from traditional GEO networks and services to a diversification of their revenue streams. While space connectivity solutions have been so far a secondary market, the combination highlights satellite operators’ expectation that connectivity will become the new growth engine for the satcom business. Eutelsat projected a period of significant growth for Satellite Connectivity market with a triplication from $4.3 billion to $16 billion by 2030. It is estimated that the share of the Non-Geostationary (NGSO) market, mostly captured by LEO constellations, will grow 2.5x faster than the overall market, thus representing almost 50% of it by 2030. While the $16 B are mainly driven by considerations of commercial circumstances, the number needs to be contextualised into the much broader picture of the thriving digital economy.

2.2 Technologies advancement: Besides traditional GEO-based solutions to address communication markets, new entrants have sought to rely on an entirely different technological approach, focusing on large satellite constellations in LEO. Eutelsat’s approach to the transaction shows that well-established satcom operators see imminent value in integrating such an approach to complement their system architecture. An attempt towards this type of market integration already occurred in 2017, when Intelsat announced a merger with OneWeb with the goal to become a global telecommunication leader providing multiorbital solutions. The deal was unsuccessful, and both companies ultimately filed for Chapter 11 bankruptcy in 2020. In addition, SES already pursued a multiorbital solution in 2020, acquiring O3B MEO Networks. SES has also more recently acquired 25% in UN:IO, which is a multiorbital network service provider consortia, and partnered with ESA, supported by the European Commission, to design the EAGLE-1 system for secure Quantum Key Distribution (QKD). It will be a significant challenge for operators to effectively implement integrated multiorbital solutions from a technical perspective.

2.3 Industrial approach: The approach developed by some of the new entrants, such as SpaceX and Amazon, goes one important step further and establishes vertically integrated processes where the connectivity solution is part of a vertically integrated market (e.g., e-commerce and autonomous driving). On this side, at present other established satcom operators such as Eutelsat and OneWeb show no signs of wanting to develop such an approach. Furthermore, several IT companies such as Apple, T-Systems and Samsung have expressed their interest in satellite telecommunication: for instance, Apple has reached an agreement with Globalstar to use 85% of its satellite network capacity to provide “Emergency SOS By Satellite”, and the service is currently available with the iPhone 14 in the US and Canada. In addition, recent examples of horizontal mergers, such as for instance the British company, Inmarsat, planning to merge with the US Viasat to propose multiorbital solutions – with Inmarsat’s global ORCHESTRA network integrating Inmarsat’s existing GEO networks with terrestrial 5G and NGSO satellites – also suggest a reconstruction of the ecosystem with fewer competitors.

3. Further challenges on the horizon

The proposed combination between the companies is expected to strengthen their position in the tense competition between satcom providers, thus feeding the challenge to create a stronger European competitor to SpaceX’s Starlink and Amazon´s Project Kuiper, and in the emerging connectivity market that combines satcom and terrestrial solutions. Questions remain on how many operators the market can absorb.

The success of satcom operators will also be strongly dependent on their capacity to secure the appropriate spectrum and launch capabilities in the short to medium term. OneWeb has global high-priority access to the spectrum in Ku-band.  However, SpaceX and OneWeb recently engaged in a dispute with Dish Network and spectrum holder RS Access, claiming their use of 12 GHz for 5G service can disrupt their incumbent satellite services. Secondly, following the decision taken by Western countries in March 2022 to no longer rely on Russian launches, OneWeb policy to access space has been transformed to ensure diversification of its launch service providers.

Finally, some strategic questions can be raised on whether and how the Eutelsat-OneWeb company will fit in the newly created EU’s space-based secure connectivity programme, called Infrastructure for Resilience, Interconnectivity and Security by Satellite (IRIS2). And, ultimately, on how the EU will leverage the market dynamics to allow “the private partner to complement the Programme infrastructure with additional capabilities to offer commercial services on market conditions through additional own investments”, while also making to pursue its own interest of ensuring non-dependence, sovereignty and security.

ESPI will further analyse the potential synergies between the EU and European industry in secure connectivity via satellite in ESPI Brief. NO 61.